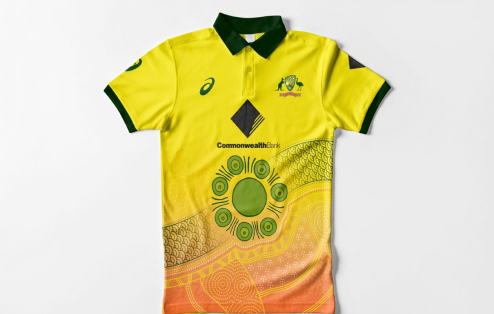 On February 1 this year, the Australian women’s cricket team made history, becoming the first senior national cricket team to wear a uniform featuring Indigenous designs in a match.

The match was a thriller, with Australia going down to England in a Super Over at Manuka Oval in Canberra. But for IVE, it marked the culmination of a whirlwind project, which saw Cricket Australia call on the holistic marketing company to come up with the design in just a few days. “Cricket Australia came to us to visualise and execute. But we only had two days,” IVE creative director Lesley Gilliam told B&T.

Despite the short timeframe, Gilliam was always confident the team could get the job done.

“It was really exciting for us, we knew we could just fly into the deep end and turnaround some really great creative work in the timeframe that was required,” she said.

While other major national sporting codes have played in Aboriginal-inspired uniform designs before, this was the first time a senior national cricket had worn such a strip.

IVE and Cricket Australia first started working together in 2016, with a focus on engaging the community through visual designs and campaigns.

However, IVE had never worked on a Cricket Australia uniform before this.

The design while turning around any project in such a short time frame comes with challenges, IVE was particularly careful not to rush it.

The design is based around the story of the 1868 Aboriginal team that toured England – this first Australian team in any sport to play abroad.

Dubbed the ‘Walkabout Wickets’, the team had to leave and return to Australia in secret to avoid public backlash.

The design used on the Australian women’s uniform earlier this month was inspired by the Walkabout Wickets logo, which was illustrated by Aunty Fiona Clarke.

“We worked around that logo, extracting elements to tell a visual story and that unifies the whole narrative right around the shirt,” said Gilliam.

The design encapsulates colours of the earth and the land and also colours of the cricket team (yellow and green) to tell the story, as well as using symbols around the logo to represent a women’s camp.

“That first session with Aunty Fiona was the most important part for us,” said Gilliam.

“We really wanted to understand what the story was about, that was important to us to know exactly what we’re trying to convey here and do so with empathy and sensitivity.

“We really wanted to make sure we were being authentic in what we were doing, even though we only had a matter of days to deliver.”

The national men’s team will also don an Indigenous uniform during the ICC Men’s T20 World Cup later this year.

How To Make Sure Your Letterbox Drop Is A Success

How can we help you?